When last we visited my modified YT-1300 (now dubbed “The Balmorra Ray”) for the X-Wing Miniatures game, I had finished removing the original cockpit and creating a new one. Since then, I cleaned it up, primed it, then cleaned it up some more, then primed it again… and now, finally, I’ve painted it!

First, I did some airbrushing. I gave it a nice bright red accent, then I dulled that color by spraying light gray from a distance, which does a nice job of bringing out the midtones of the color without making it too dark. Here are the pics:

Then I edged off the splatter of the airbrushed red, did some dark washes and some brown washes, put on some black, and highlighted the bridge area. I also painted in a windshield. Here are the pics!

The flash on the camera makes the highlights and shadows more pronounced than natural lighting, so I think it actually looks much better in person than in the photos. I’m very happy with how this turned out, including little details like the clear plastic connector still being clear.

I do need to color in the engine (right now, it’s primer gray), and then I desperately need to put a clear coat on it, because the paint on this rubs off way too easily (and I don’t know why).

Thanks for checking it out! More to come!

A long post, but I’ve finished the work on the custom YT-1300 for the X-Wing Miniatures game. Let’s review!

First, I put more plasticard in place to finish the structure of the bridge. I also use a small amount of Apoxy Sculpt to give it a bit more structure. The plasticard is a mix of cards from weird games (Transformers 3D Battle Game, Star Wars PocketModel TCG), gift cards (which are nice and thick), and regular old styrene sheets. I also used a plastic stick from something to add the tube to the bridge’s right side… which I figure must be where the modified concussion missile launcher is now. (It just so happens that YT-1300 diagrams show that the concussion missile launchers are where I put the new and improved bridge – right between the mandibles.)

And so it’s ready for priming!

It still doesn’t have a name, but I guess that can wait for painting. Next up, I prime the model and start painting!

I took a look at the arrangement of the cockpit after my last post and I decided I didn’t like it. So I went looking for a new idea. Eventually, I came across the freighter flown by the Smuggler class in Star Wars: The Old Republic. Here it is:

As you can see, the concept artist used the YT-1300 as a base for this ship. I love the bridge section, so I decided to work with that.

I used plasticard to build up the bridge, but not just any plasticard! A friend of mine sent me a box of the Transformers 3D Battle-Card Game long, long ago. The cards are made of plastic, so I took some bits of one of them and glued them onto the YT-1300. This meant I had identical bits without cutting them out freehand. Check it out:

Here’s a shot of the YT-1300 with extra bits identical to the ones I used on the model.:

I also decided to mod my Firespray model. I added a little dorsal fin (also made from Transformers Battle-Card bits) and some random bits to the front/top… maybe they’re a sensor array or something:

Obviously, I need to do more work on the bridge of the YT-1300, so stay tuned!

Hey, I’m back! After a long hiatus, I’m hopefully back to posting fairly often about cutting and painting plastic toys… so let’s get back to it.

The X-Wing Miniatures Game is very fun and features very cool Star Wars miniatures. One of those miniatures is the YT-1300 freighter, familiar to most people because the Millennium Falcon happened to be that model of ship. And since someone made a plastic thing, that means I just have to cut it up and personalize it. Actually, the YT-1300 was popular because it was modular and easily customized… so let’s just say I’m exploring the aftermarket options.

So, taking my trusty X-acto, I cut into the model. The resin of the model is incredibly tough – I broke a thin blade, so I went with a thicker (albeit duller) blade. Once I got the point through, pulling back to cut was easier. But I had scored it. If you’re looking for advice to do what I’m doing that’s the best I can offer. Once I got the cockpit and the crew-tunnel looking bit off, this is what I was looking at: 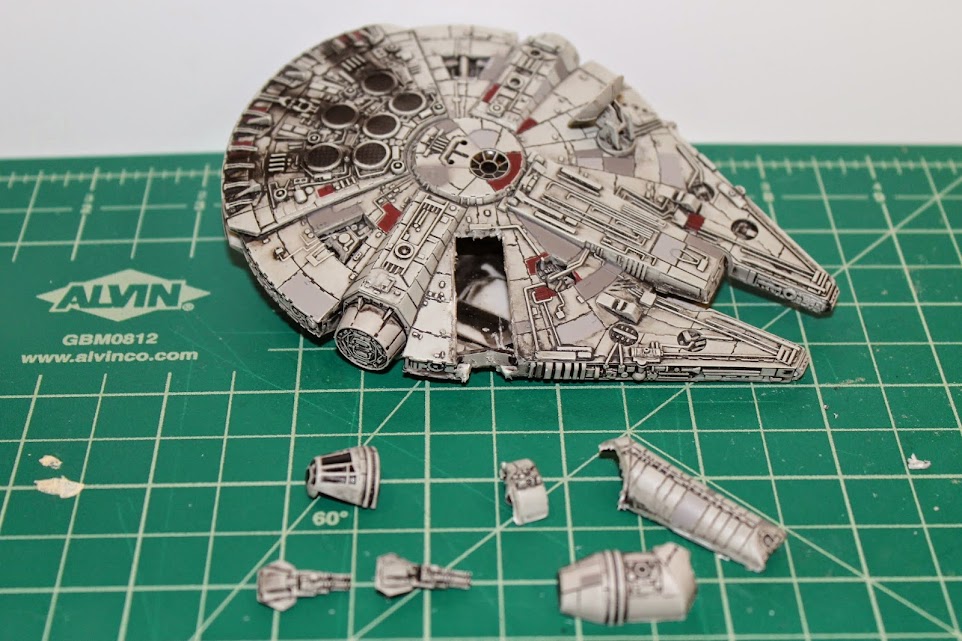 I also removed the guns, just so I wouldn’t break them. They pry off fairly easily, but I did break a peg in the process… nothing superglue won’t fix later.

Now, I have some decisions about where the cockpit goes and how it should look. I want the cockpit down the middle of the ship, position forward, but with the windows high enough for a clear view all around (which is better visibility than the standard YT-1300 configuration has!).

I fixed the pieces on with tacky wall putty as I evaluate my options. Here’s my first thought:

I like the general feel here, but some of it doesn’t look quite right. I don’t like the gaps between the cockpit and the ship (I feel like a cockpit should be strongly attached to the rest of the ship), and the way the hull meets the cockpit doesn’t look right (the bit on the hull is too small), but a little bit of work and this will be magical.

My plan is to reattach the cockpit, add some extra details to really customize the ship, then re-priming and repainting the whole darn thing! Stay tuned!