The Defiler /slash/ Brass Scorpion is complete, sculpting-wise! I’ll break up the last final steps into two or three posts.

So, I took heavy flamer bits from Chaos Rhinos and put those together with the close combat arm attachment from the Defiler. I threw on one of the demon-head cannon tips for decor. This is what came out:

Then I mounted that onto some gears from an old printer. Remember: Bitz are everywhere! If you have space for it, save anything that looks neat. You’ll hear more about that soon. Here’s the mounted flamer:

I am serious about pinning. Deadly serious. Here’s a blurry photo of the large screw I used to mount the flamer turret, and a photo of the final product (mounted on another gear, for that extra gear touch.) 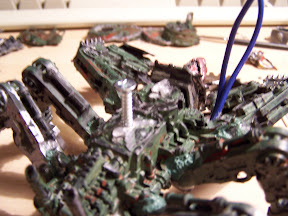 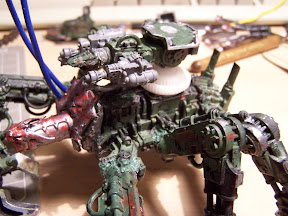 “Yo dawg, I heard you liked gears so I put a gear on your gear so you can defile while you defile.”

Now, the scorpion tail. First, I added the “skeleton” if you will. As you can imagine, there were several pins used – a few pin-sized pins and at least one nail. In this picture, I’ve attached the skeleton and (temporarily) stuck the autocannon “stinger” on to check out the spacing and positioning.

This bit is from a Mad Hatter toy from American McGee’s “Alice” video game. So, if the video game came out in October of 2000, you can imagine I’ve had this for a long time. It broke off the toy at some point. I liked the look of it, so I kept it when I tossed the rest of the toy. This was about 8 years before I ever considered modelling minis. Really, in a philosophical way, most of my life has been about collecting bitz. I just didn’t know it.

Anyway… it keeps with the theme of gears and wires, so it’s a great bit! The Forgeworld Brass Scorpion has a tail that looks like a bundle of wires. I really like the look of it, so that’s what I wanted to do with this model as well:

This was easy – grab a big wire (from an old stereo – everything is bitz!), superglue the Hell out of everything, then place the wire. Repeat. I used different size wires and twisted them over each other in places to create a nice bundled look. Visually, just a few wires looks like a whole lot of wires – I used about 12 lengths of wire total. It looks like a lot more, and the twisting of the wires misleads the eyes and makes it look a lot more complicated than it is.

You’ll notice in this picture I’ve used plasticard to start a box at the base of the tail. Some bulk was necessary there – otherwise, the wires would just kind of end. I figured I’d make it look like they all went into a sort of switchbox.

Next, I mounted a gear doodad (from the printer, again) on the back of the autocannons and made the “stinger,” if you will:

You can kinda see here that I finished the “switchbox” at the base of the tail. The tip, where the autocannons attach, still looks wrong in this picture. The two blue wires are still hanging loose, but I soon decided to connect them to the switchbox as well.

So, the biggest part of things is done. In the next post, I add the finishing touches! 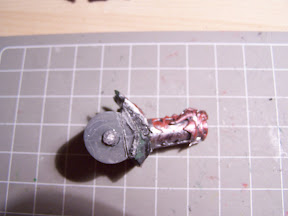 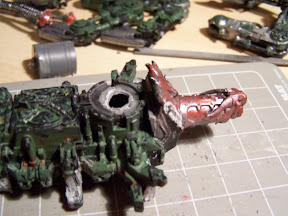 So… I bought a Chaos Defiler from ebay about two weeks ago. I wanted to make a scorpion-style Defiler (that could possibly double as a Brass Scorpion), but I didn’t want to do it from a fresh kit. If I’m going to kit-bash and cut up a model, I might as well do it to a cheap one from the internet.

I maybe got a little more than I bargained for.

The first step was to immerse the Defiler in the wonder of Simple Green. Simple Green is a cleaner that is usually sprayed onto car parts, bike parts, etc. It can degrease and strip off stains. And lots of folks know it’ll yank paint right off models without harming the plastic… well, acrylic paints.

Now, the Defiler I got from ebay is about the ugliest, most poorly-assembled model one could find. Not a big deal, I thought – it’ll be more of a challenge, and modelling challenges are the kind I most enjoy.

First, I left the Defiler in a Simple Green solution for two weeks:

I had to weigh down the lid because the Defiler is a floater. So, after two weeks, the results weren’t quite what I hoped: 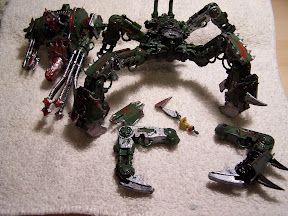 Yikes. Whatever paint was used on this thing, it’s not responding to Simple Green. Well, I won’t let that stop me. Updates to come!

Note: In no way has this incident shaken my faith in Simple Green. It works! Just… not on whatever was used to paint this monstrosity.

I finally have the time to update!

Here are some pictures of a jump pack chaplain I’ve customized for my Space Marine army. The winged jump pack is from a Blood Angels figure, the helmet is a fantasy Chaos helmet, the mace (I mean Crozius Arcanum) is from the Dark Angels veteran box, the chest and legs are from the Blood Angels Sanguinary Guard. Pretty awesome stuff slapped together to make a pretty awesome chaplain! More to come – I’ve got a Defiler conversion and more daemon prince pics on the way.