The last two posts have used the Magic Set Editor for “visual enhancement.” Now, let’s talk about what that is…

The Magic Set Editor is software aimed originally at creating custom cards for the Magic: The Gathering card game. The site also has templates for Yu-Gi-Oh!, VS, L5R, Innovation, and many other games. Another fellow, “Ander00”, created a nice template for 4e features and powers (check out the thread on enworld.org).

But, even without downloading and installing the Anders set, the MSE can do some great things for you. I had used the Anders template before the Character Builder duplicated its functionality, but until recently, I hadn’t thought of what else the MSE could do for me.

One thing I always feel is lacking in most D&D games (and which leads to players being more easily distracted) is the lack of visual stimulus. While players might have an idea of what their own character looks like, in their mind’s eye, the other characters in the party don’t have faces, and are probably just tied to the player who plays them.

But it doesn’t stop with what other PCs look like. You’re swinging around that +6 holy avenger, an artifact in its own right – what does it look like? What style is your armor? What physical qualities does that key NPC have? Certainly, D&D is a game centered on imagination, but grown-ups have to work all day and take care of adult stuff  – by the time we get to the D&D table, we’re a little too tired to play pretend sometimes.

Well, MSE can’t fix all your problems, but it can certainly provide you with some visual stimulus. Let’s start where I started – key NPC cards! For those recurring NPCs – good or evil – it’s not a bad idea at all to give the players a visual reference. And, instead of turning your laptop around to show them the picture every time, why not make a little “Magic” card of the NPC?

Now This Gets Image-Heavy…

When you’re in MSE, making new cards, you can set the “style” of the card. With the Magic card template, there are tons of styles with little-to-no text boxes, leaving more room for the image! Here’s an NPC from my Dark Sun game:

I used the existing boxes on the card template to give her name, “class” and affiliation, but obviously, there are a lot of potential uses. PCs obviously follow the same basic format. Here’s a PC from my Dark Sun game:

So, NPCs and PCs are fairly obvious. What about bringing some spice to a magic item? In Dark Sun, a world where the PCs are bound to be scrounging up whatever they can, I think it’s a good idea to highlight the magic items with cards. Here’s the first magic item that the party received:

The item is just a Cloak of Resistance with a cool name. (Note: Cloak art is hard to find. Most people don’t paint fancy fantasy pictures of someone with their back to you.) The powers and Enhancements of the item all fit on the card nicely. Now the player has a nice visual reference to go with the special item he received. I have another item card which fits into another idea I have for my Dark Sun game: 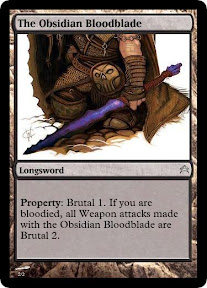 This isn’t an item I’ll use for my game because no PC uses swords, but it’s a style I’m interested in. The Obsidian Bloodblade is a sort of “semi-magical” item. This is more of a teaser for yet another article I want to write, possibly titled, “Making Legendary Magic Items” or something. This article is about the Magic Set Editor, so let’s get back to that.

So, we’ve seen PCs, NPCs, and magic items. What else can the Magic Set Editor be used for? 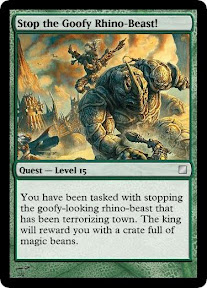 We’ve all played World of Warcraft or something like it – I think an explicit quest mechanic is lacking from D&D. Again, I should write a separate article about this, and I will. But here’s another fun idea from the “Quest” concept: 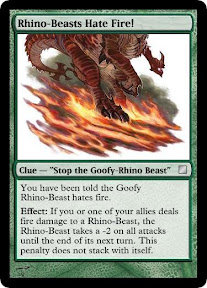 The card concept is actually perfect for temporary things, like potions, sun rods, or even action points… especially when you have players who always forget that they have these things! 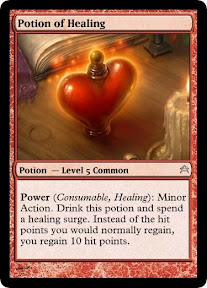 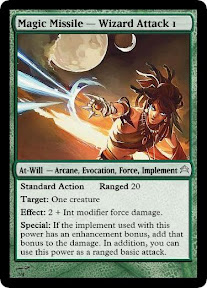 It may be more visually appealing, but as a warning, this won’t work very well for some of those really long-winded powers.

I also have the vaguest of ideas on how to use the MSE to make cards that will make skill challenges a bit more interesting, but that idea is very vague, and probably requires its own post.

Where Do I Get Art?

Good question. Quality art is the centerpiece of this idea, since the whole point is really to make D&D more visually appealing and concrete for the players.

If you’re a D&D Insider subscriber, you can browse art galleries galore on their site. This is handy because the art is of very similar styles, so there’s not too much jarring difference from one piece to the next. Not a D&D Insider? There’s still a lot of art available for free on the D&D site, although it’s a bit older. I suggest checking out Gatherer as well – it’s an index of all Magic cards, ever. The art is small-ish, but printable.

There are also piles of artists on the internet throwing art out there that you can easily pilfer (I’m not a lawyer, but I think it’s Fair Use). Google Images is your friend.

The MSE is pretty easy and intuitive… for me, at least. It takes care of a lot of stuff for you, from resizing text automatically to having a dialog box for cropping images to fit. It’s also got a nice printing interface, with the ability to print out many cards per sheet to save paper. If you were so inclined, you could print directly onto cardstock.

Once you print and cut, it’s easy to stick the cards into card sleeves from your local gaming store. Or, if you have a pile of actual Magic cards, we all know you can glue the printed cards right over those extra Islands – they don’t make Fireballs or Lightning Bolts, so who cares about Islands?

Within an hour or so, you can have a pretty nice handful of cards for use in your game, however you decide to employ them. With enough fussing, you can even customize or modify templates to get exactly what you need out of them.

For the price ($0), you just can’t beat the Magic Set Editor.