When my Grey Knights came in, I immediately got cracking on the Nemesis Dreadknight, which you may remember from a previous post. This model looked like a really fun chance to magnetize something new. It was a huge success, partly because Games Workshop seemed to want to make it easy on me. Without further ado, let’s get to the meat of it.

1) I didn’t like the hydraulics supporting the arms, so I removed them entirely. Keeping them would make this project more difficult, but I can’t tell you how much more (since I didn’t do it).

2) I didn’t care if the gun barrels matched the gun housing precisely. (You’ll see what I mean later.) If you care, it would be easy enough to maintain the consistency with more magnets. But I think it looks fine my way (if not better).

3) The torso could easily be magnetized to the legs, allowing rotation of the torso at the hip. That could be pretty cool. I didn’t do that because it didn’t add much utility or style, in my opinion.

Firstly, I assembled most of the model, leaving the arms for last, since that’s where all the magnets are going. In these two pictures, you can see how I cut the hydraulics, leaving the ball joint in the shoulder and cleaning them off to be rounded. I think it looks much better.

First, I took a small piece of metal (from picture hangers) and rolled it up with pliers. Then I super-glued it to the inside of the arm. You could do a magnet in here, but with the hex-shaped fitting on the back of the hands, it’s not necessary. Make sure to test the positioning of the metal and the magnet before you glue it all together, of course. 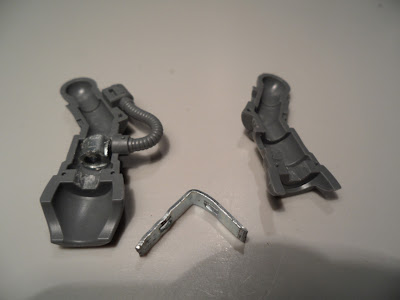 Here you can see me sizing up the magnet and the metal. I actually had a 1mm gap, but rare-earth magnets are strong, so I didn’t worry about it too much. Note here how I glued the magnet to the hand’s hex-shaped fitting. 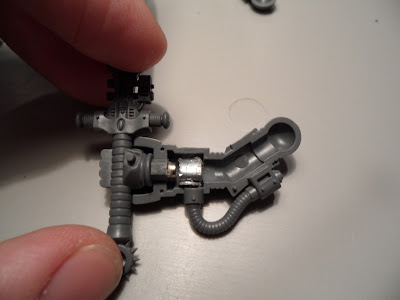 Yes, I am a messy gluer. Big hands and big fingers aren’t great for this stuff. Here’s a shot of the hammer and sword all magnetized alongside the right arm. 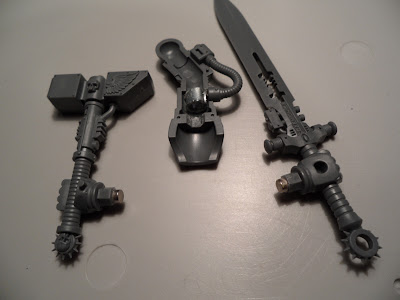 Now, here’re a couple of notes:

1) The right hand should be magnetized. The left hand can be glued – the sword and hammer are mutually exclusive, and only go into the right hand slot.

2) While there are three right hands in the set (one Doomfist, one Nemesis Greatsword, one Nemesis Daemonhammer), there are only 2 matching fingers. I’m going to solve this with green stuff, although I have not yet done so. (In the photo above, you can see the Daemonhammer has no fingers.)

This ended up being a little messy, but I figured out my preferred method late in the game. At first, I was just going to stuff metal objects in the gun barrels and a magnet in the gun mount. This didn’t really work well. Here’s a shot of a bent-up metal nail in the psycannon barrel. 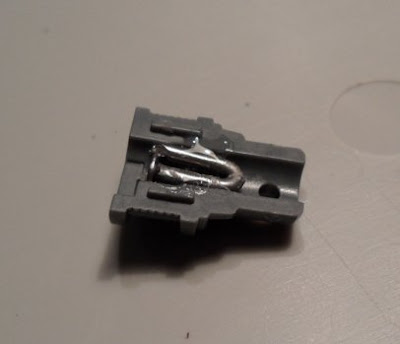 This was FAIL. The magnet didn’t really “grab” the nail with the force I wanted. This method probably could’ve worked had I found a more ferromagnetic thing than this nail, but I have dozens of magnets… so I went with putting a magnet in each barrel.

With the gun mount, I simply glued it together, waited, then drilled a 1/8″ hole in it. The magnets I have – which I believe are 3mm (which is .12 inches) fit well in the 1/8″ hole. I didn’t have metric drill bits. 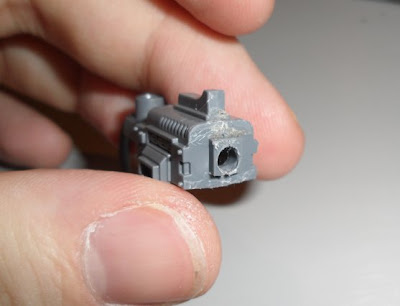 As you can see, the 3mm magnet fits perfectly in the “stud” on the gun mount. Again, my gluing is messy. Also, after drilling, the “stud” is a bit misshapen, so I filed it down, making it look even uglier in this picture. The second mount looks better! 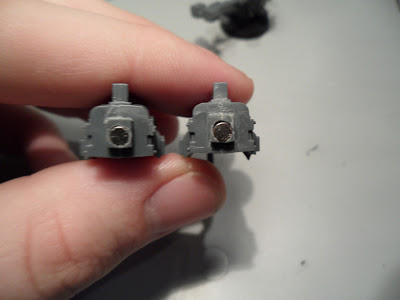 So, the second one I did is on the left, and it looks nicer! Yay!

Now, the great thing here – thanks to Games Workshop – is that the whole gun mount has a hose that runs around the elbow of the arm. This allows the gun mount to snap on to the arm – no magnets necessary! So long as you’re careful, this allows you to snap the gun mounts onto and off of the arm without much stress on the plastic. If it does break, you can glue it back on. If you’re still a bit scared, there are pretty clear places to stick in magnets, but I’m just going to stick with the snap-on option. 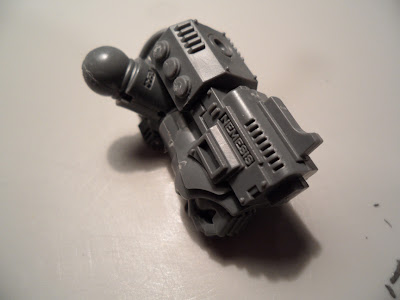 Bam! Snap on! Here, I’ve also snapped on the “psilencer” accessory. I don’t have any pictures of the different “gun mount accessories,” but basically, these pieces go on the back of the gun mount to give detail specific to each weapon. This is the “psilencer” detailing, but it looks fine for the psycannon or the incinerator weapons. So, I am just gluing it on the left arm. On the right arm, I’m choosing to glue on the “psycannon” details, which are basically ammo boxes with belt feeds. The third accessory – for the incinerator – is two fuel tanks and some pipes. I think the “psilencer” accessory, which is a big box with a few hoses – works great for any of the gun barrels. Likewise, the “psycannon” accessory looks great with the psilencer barrel, so this means any combination of the three weapons on the two arms will look fine. The incinerator tanks will be fine bits elsewhere in my collection.

Sure, you can say I am taking shortcuts, but too much magnetizing can weaken a model too much. The way I did this model, it will be a very hearty model, and the magnet parts won’t easily come off.

Anyway, back to the barrels. Since the nail failed, I scraped out space in each barrel for a 3mm magnet, and I filled gaps with green stuff to make it really resilient. Here’re some pictures of the finished barrels.

And now, pictures of the Nemesis Dreadknight with all sorts of weapon combinations!

Hooray! I’m very pleased with this, which is my first (finished) magnetic project. Now I have to paint it… oh no…

Feel free to ask me any questions, as I know there might be some gaps in explanation if you’re trying to replicate my work. Sorry!

3 thoughts on “Magnetizing the Nemesis Dreadknight”