In my constant quest to make D&D even better, I am always looking for unique ways to reward players. With my Dark Sun campaign, I want to really capture a feel of desperation and rare magic, so I am not giving out a lot of magic items at all. In fact, it’s a very dry well. Of course, I’m using the inherent enhancement bonuses rule, so my players will get statistically better without items (albeit slowly). But my players still need the options and fun that magic items bring to the game.

As a side note, I really like the “Boons” added to 4th edition in later supplements. These are magic item effects that aren’t based on items, making them perfect for games in which the player characters aren’t going to be bristling with shiny, glowing armor and weapons.

Enter the “Convocation”. A “Convocation” is like a Boon, but it’s meant for the whole group to share in. This could be as easy as giving all the PCs access to a specific magic item’s Property or Power… or it could be as complex as the “Blessing of Anyanna” that I’ll describe below. My basic theory is that the character can use the Convocation as if it were a magic item, using a Property or Power from that Convocation. (Note to those who don’t read the D&D 4e rules updates – the whole concept of “daily magic item uses” has been removed, so this is a lot simpler than before.)

What’s the point of a Convocation? Basically, it serves as the kind of reward a group might get as a whole instead of as an individual reward. If they save the wizard Gamblagog from the clutches of the ice dragon Wienzerberber, then Gamblagog might cast an enchantment to give the whole party the Property of Veteran’s Armor (which is useful for most classes). In that case, it’s not much different from handing out the same Boon to each character.

Now Let’s Spice It Up a Bit…

Here Are Some Convocation Ideas…

Note that there is absolutely no playtesting in the following ideas. They are just the things that pop into my head. 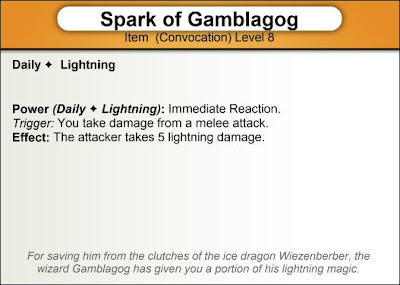 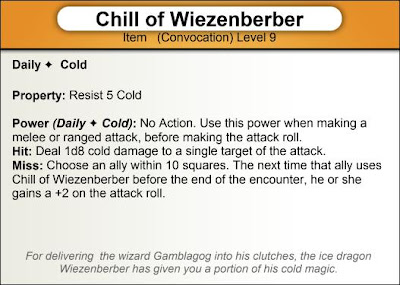 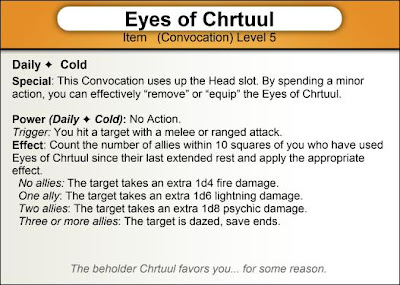 So, this post is long enough already – thus, the aforementioned “Blessing of Anyanna” Convocation I’m using in my Dark Sun game will be stuck in its own post.

And after that, you might want to know how I made these power card things, which I’ll explain in yet another post!

One thought on “D&D: The “Convocation” Magic Item”