When last we looked at my custom daemon prince, I had redone his head and a few details here and there.

The next step was to bulk up and detail his lower legs. Thanks to some bits from Scibor (who I am now pimping left and right in this blog), I had some nice boot fronts for him. I had to bulk the calves up with Green Stuff, and I had no real plan for how they would look when I started mixing the Green Stuff. I started to put some folds in and just went with what was happening. It is better to have a plan. But here’s how they came out: 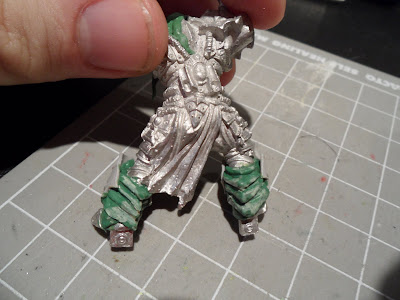 It doesn’t look too bad, after some post-curing slicing and dicing. The nice part about Green Stuff is that it’s practically a carving medium after it cures. You could even carve details into it, if you were good at that sort of thing – I’m probably not. So, here’s a shot of the fronts, where I used the Scibor bits. 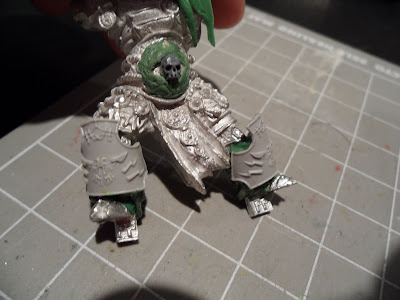 Again, Scibor is a great sculptor who does great bits. The details on the leg armor are generic enough that it works for a daemon prince just as well as a Space Marine Captain.

Next up were his arms and weapons. I liked the swords at first glance, and I thought I would just keep them. In all the time since I started this project, I decided they didn’t quite have the right look. A jeweler’s saw does the trick – a clean cut without losing a lot of metal. 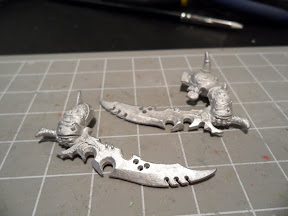 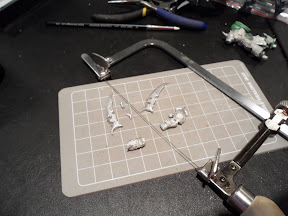 The arms came out really nicely, and a little Green Stuff will add details, like the top and bottom of his fists. Then, I pinned and glued the arms onto him. 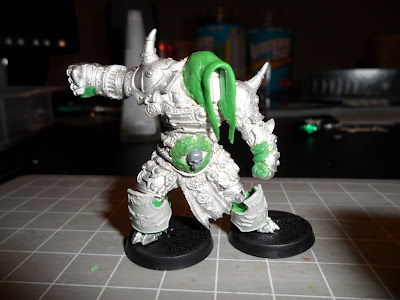 What’s great is that I’ve kept the cleft feet under the bulkier leg armor, and that his left arm will look fine without a weapon in it.

My next step is to find the right combination of bits and whatnots to give him a cool polearm or staff that he’s holding in his right arm, angled down towards his feet (so that it all fits nicely on a 40mm base). Then I add some wings to him and he’s all done!