Just an update of what I’ve done on my Land Raider Achilles! When last we left it, I had placed the decorative plates into the sides of the tank, but there were still big, uneven gaps between the plates and the hull. Using the magic of Green Stuff, I sculpted a frame for each of the plates. This sort of precision work is not my forté, but there’s no way to get better at it without practice. Here’s a shot of the sides:

There was unevenness in the front of the Land Raider as well (that’s just how it goes with resin bits, really), so I pounded some Green Stuff in there too. This is a picture of the rough work (before I trimmed and sanded it): 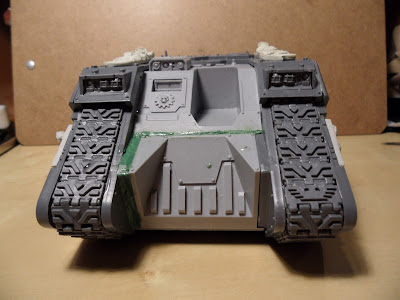 With the Green Stuff initially in place, the Achilles is really starting to come together. (I should come up with a name for it, like uh… Death Skull Angel Death… that might be too long, though). 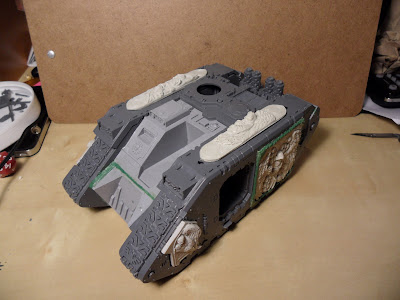 So, then I cleaned up the Green Stuff and fitted the guns on. I glued the sponson (the side gun) mounts into the door holes, but the multi-meltas, the Thunderfire Cannon, the sponson top, bottom, and sponson gun pole are not glued in place. It’s too hard to paint in those crevices. 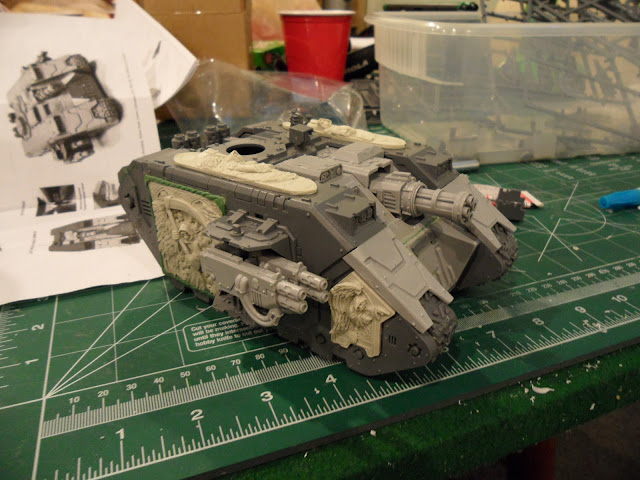 This thing looks great! I am going to put a magnet under the hatch before I glue it on, then I’ll magnetize the storm bolter and HK missile in case I care to stick them on at some point in the future. (I don’t really see that happening, given that the thing is bristling with firepower already, and 10 points for a couple bolt shots isn’t usually going to be as good as the same 10 points spent somewhere inside a Tactical Squad.)

So, it’s nearly ready to primer, and then the painting can start!

Edit: I forgot to note that, with the reaper decorations in the front nooks, the armor plating that is hanging out over top of the tracks had to be trimmed down. This trimming is imperfect, so before I paint, I’m going to try Squadron’s “Green Putty” in those gaps. This will be the first time I use Green Putty as opposed to Green Stuff, so it’ll be a fun experiment (as soon as my Green Putty arrives)!