After making my own custom miniature (my daughter, born on September 18th!), I’ve been out of commission for blogging purposes. But now I’m working my way back into action! So let’s see a few things I’ve had time for.

First, I’ve been putting together some bits from Scibor to decorate my Land Raider Achilles. These beautiful pieces are decorated with the Grim Reaper, complementing the commander who rides in the Land Raider, Captain Tharsis the Grim. Here are some photos…

I had to cut a big hole in the side of the Land Raider first: 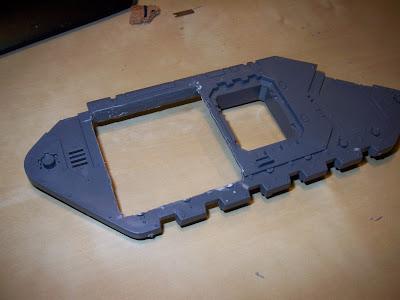 Then I placed the (50mm square) reaper plate in the hole (this is the opposite side from the previous photo). 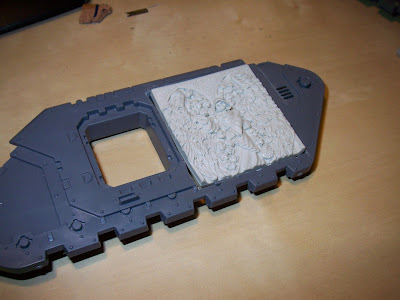 I glued sprues across the back, providing both a glue point and a way to keep the plates basically straight: 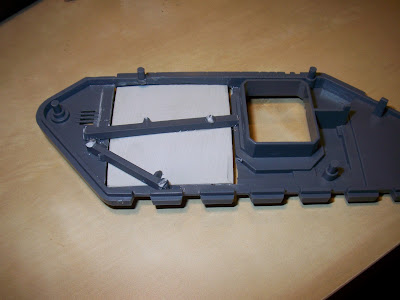 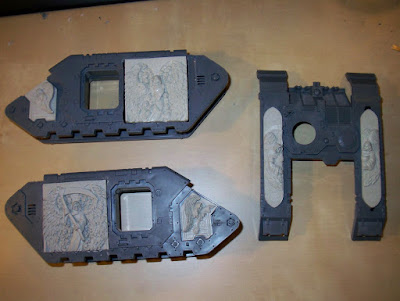 Of course, I need to put some Green Stuff borders around the big plates – there are big gaps (neither my knife nor Scibor’s plates were perfect) and the plates obviously don’t match the contours of the tank. I debated cutting the back corners of the big reaper plates to match the angle of the back of the Land Raider – that might have looked better, but I think framing the square plates will look good.

If I did this again, I would consider trimming off the “background” of each reaper image and rounding the sides and bottoms of the plates. This might make them stand out, kind of like statues more than engravings. Then I could just smooth down the Land Raider and glue the “statues” to the sides. That might fit onto the tank better. Still, cutting out the plastic means the plates sit into the sides of the tank, rather than sticking out of the sides. I do think a clean border around the “plates” will look great… all I need to do is be skilled with my sculpting!

Introducing Atlan the Doughty, Captain of the Immortals (1st Company)… 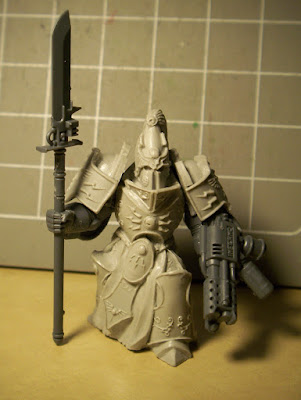 Atlan is a Scibor body (looks kind of like an Adeptus Custodes to me!) with Scibor shoulders and Grey Knight Terminator arms. He is “counts as” Vulkan He’stan, so that’s artificer armor, a relic blade, and a heavy flamer.

Alongside him is Ptolomaeus the Unyielding, Captain of the 3rd Company… 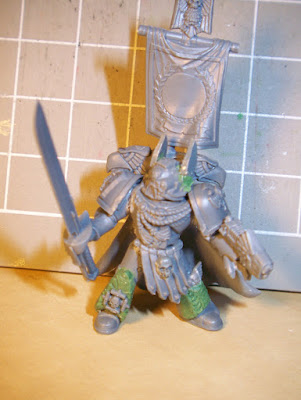 Captain Ptolomaeus is blurry, but he’s basically a Force Commander kit with some Green stuff on his legs and arms from Sanguinary Guard. I love the Sanguinary Guard bits, so you’ll see them scattered around as I work my way through the box. I also did some work to add wings to his helmet, which doesn’t look great here. He needs a bit more work, but he has artificer armor, a power sword, and a plasma pistol (and he “counts as” Cato Sicarius).

Clearly, I need to take better pictures, but I don’t have an ideal setup right now…

Thanks for reading – more to come soon!