I’ve integrated Google’s “+1” doodad along with Twitter and Facebook sharing buttons to make it easier to inform your friends that you’re a huge dork! You can “share” the main page or individual posts – so enjoy that feature, bub!

The Warhammer 40k game is fun, but its rules are not organized well in current rulebooks. (I hear the 6th edition rulebook will be well-organized.) Thus, teaching a new player can be a pain. But… what if there were handy cards to hand the new player as a reference? 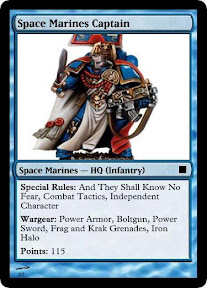 Of course, the default Magic card style isn’t really great for 40k stats, is it? It could work a little better for special abilities like psychic powers… 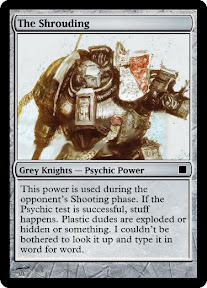 That’s a little better, but it doesn’t help us remember the WS of an Ork Loota. What if someone were to make a template that could easily display 40k character stats, vehicle stats, weapon stats or special rules so we could reference them easily during the game? 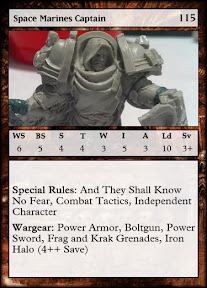 The templates aren’t done yet, but the first one (for infantry, characters and other things with wounds) came out very nicely. I’ll still need to finish a vehicle (possibly also a walker) template, a weapon template (with room for their rules) and two ‘generic’ templates (one with an image slot and a text box, and one that’s just a big text box).

Wow, that is a really lame title for this entry. I was going to call it “The Blood Is the Life,” but I like this one better. Anyway, this article is about the new Vampire class in Dungeons & Dragons.

When Heroes of Shadow came out, I flipped through it, noticed the “Vampire” class and thought, “What the what now?” But I quickly became used to the idea of “Vampire” as a character class. After all, anyone of any race can become a vampire, and “vampire” defines the powers and abilities of the character. And, if you want to play a Vampire Paladin or something, there are still reasonable ways to accomplish that (like the Vampire heritage feat, or hybrid Vampire, which has playtest rules).

The Vampire class is weird, though. It’s an implement user – ki focuses and holy symbols, for some reason. It’s an “Essentials” class, so it doesn’t have the power choices of the Player’s Handbook classes. But you do get to drink blood (basically), turn into a bat (if you want to) and generally be creepy and lurk in the shadows. Fun times!

I decided, then, that I would play a Vampire when the opportunity came up in our Living Forgotten Realms game. I was making this character at 11th level so, while I didn’t have any choices of encounter powers or daily powers (the Vampire class has set powers and few choices), I would need to pick 7 feats, some magical gear and stuff like that. Intrepid explorer that I am, I went to the internet to find recommendations for Vampire choices.

Now, I am not really a min-maxing guy, but I like a little optimization, I like combos, and I like to contribute effectively to my party’s success. So, I try to make characters who can hold their own when the chips are down and the solo is doing a burst 5 that dazes.

And that is how I found out that the internet hates the Vampire class. From the character optimization forum at wizards.com to the various reviews of the class around the net, everyone was coming down hard on the Vampire. It made me sad. It also made me double down on my Vampire – I was going to find a way to make this guy work.

“I Vant to Optimize Your DPR.” END_OF_DOCUMENT_TOKEN_TO_BE_REPLACED

The last two posts have used the Magic Set Editor for “visual enhancement.” Now, let’s talk about what that is…

The Magic Set Editor is software aimed originally at creating custom cards for the Magic: The Gathering card game. The site also has templates for Yu-Gi-Oh!, VS, L5R, Innovation, and many other games. Another fellow, “Ander00”, created a nice template for 4e features and powers (check out the thread on enworld.org).

But, even without downloading and installing the Anders set, the MSE can do some great things for you. I had used the Anders template before the Character Builder duplicated its functionality, but until recently, I hadn’t thought of what else the MSE could do for me.

One thing I always feel is lacking in most D&D games (and which leads to players being more easily distracted) is the lack of visual stimulus. While players might have an idea of what their own character looks like, in their mind’s eye, the other characters in the party don’t have faces, and are probably just tied to the player who plays them.

But it doesn’t stop with what other PCs look like. You’re swinging around that +6 holy avenger, an artifact in its own right – what does it look like? What style is your armor? What physical qualities does that key NPC have? Certainly, D&D is a game centered on imagination, but grown-ups have to work all day and take care of adult stuff  – by the time we get to the D&D table, we’re a little too tired to play pretend sometimes.

Well, MSE can’t fix all your problems, but it can certainly provide you with some visual stimulus. Let’s start where I started – key NPC cards! For those recurring NPCs – good or evil – it’s not a bad idea at all to give the players a visual reference. And, instead of turning your laptop around to show them the picture every time, why not make a little “Magic” card of the NPC?

Now This Gets Image-Heavy… END_OF_DOCUMENT_TOKEN_TO_BE_REPLACED

In my previous article, I talked about Convocations as a magic item idea for 4th edition Dungeons & Dragons games. In this post, I’m just going to talk about the Blessing of Anyanna Convocation I just introduced to my Dark Sun campaign. For more information about my Dark Sun campaign, check out the blog The Light of a Dark Sun, which has been discussed on this site earlier.

So, in the Light of a Dark Sun campaign, the characters have been introduced to the idea of a divine god existing and wishing to heal the world. All the characters are members of the Veiled Alliance, so they’ve heard stories of Dark Sun’s green past. But not all the characters are convinced this goddess, Anyanna, is real (and rightfully so). One of them, however, is a devout follower.

After the only priestess of Anyanna cured them of a zombie disease, the player characters gained access to a power called “The Blessing of Anyanna.” They can only use this power if they are Good-aligned and their character has faith in Anyanna, which (as of last game) only one of them claims. Here’s the power card for Blessing of Anyanna:

I know what you’re saying – “A deck of cards? How gimmicky.” Or maybe you’re not saying that. But most of my players are folks who love card and board games, so I think it fits their pre-existing interests.

The deck of cards also gives me a chance to add some more flavor and visual appeal to the game. I whipped out the “Magic Set Editor” software (which I’ll explore in yet another post) and slapped together some cards for the Blessing of Anyanna deck. I’m super-pleased with them:

END_OF_DOCUMENT_TOKEN_TO_BE_REPLACED

In my constant quest to make D&D even better, I am always looking for unique ways to reward players. With my Dark Sun campaign, I want to really capture a feel of desperation and rare magic, so I am not giving out a lot of magic items at all. In fact, it’s a very dry well. Of course, I’m using the inherent enhancement bonuses rule, so my players will get statistically better without items (albeit slowly). But my players still need the options and fun that magic items bring to the game.

As a side note, I really like the “Boons” added to 4th edition in later supplements. These are magic item effects that aren’t based on items, making them perfect for games in which the player characters aren’t going to be bristling with shiny, glowing armor and weapons.

Enter the “Convocation”. A “Convocation” is like a Boon, but it’s meant for the whole group to share in. This could be as easy as giving all the PCs access to a specific magic item’s Property or Power… or it could be as complex as the “Blessing of Anyanna” that I’ll describe below. My basic theory is that the character can use the Convocation as if it were a magic item, using a Property or Power from that Convocation. (Note to those who don’t read the D&D 4e rules updates – the whole concept of “daily magic item uses” has been removed, so this is a lot simpler than before.)

What’s the point of a Convocation? Basically, it serves as the kind of reward a group might get as a whole instead of as an individual reward. If they save the wizard Gamblagog from the clutches of the ice dragon Wienzerberber, then Gamblagog might cast an enchantment to give the whole party the Property of Veteran’s Armor (which is useful for most classes). In that case, it’s not much different from handing out the same Boon to each character.

Now Let’s Spice It Up a Bit…

Here Are Some Convocation Ideas…