I’ve gotten some of the new Grey Knights, I assembled some old metal Grey Knights, and I’ve done some more work on my daemon prince… but I’ve been too busy to update! 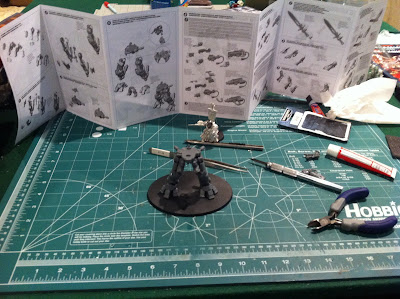 So, here’s a quick shot of the Dreadknight’s assembled legs. And yes, that huge paper behind him are the assembly instructions. There are… a lot… of pieces to the Dreadknight. It is a very awesome miniature, even for the relatively high price, and with so many pieces, it reminds me of the car models I did as a kid.

Now, naturally, I’ve had to do some customization on the kit to give it that “Chuck is very particular” feel. For instance, I’m removing the arm hydraulics (they distract too much from the baroque look of the Grey Knights army, in my opinion) and I’m magnetizing all the weapons (which ought to be pretty easy).

No updates on miniatures and no new Dungeon Master ideas… because this week, Dragon Age II was released!

I loved Dragon Age. Sure, some of it was ugly. Some of it was clunky. But I really liked the mythos, the world and the characters (mostly). I’ve been eagerly anticipating Dragon Age II, and I can summarize my review with one line.

Many of the changes BioWare made for Mass Effect 2 are repeated in Dragon Age II. The game is less clunky, which really means they’ve removed a lot of the things that slowed down Dragon Age. There is less equipment to worry about upgrading, there are less skills to worry about covering, and the conversation options are very, very clear. The quests take less time, there’s less traveling and random walking about.

Of course, that means it’s a very different style of game. Lots of people love their open-world RPGs – Fallout 3, Elder Scrolls, etc. Dragon Age wasn’t open-world at all, but Dragon Age II is practically on rails. I love open-world RPGs, but I’m perfectly happy to be lead through a story as long as the gameplay is fun and the story is good. I can go back and play Fallout 3 for the 100th time whenever I want, so I guess I don’t need any more games that are that open-world.

And that is where Dragon Age II excels – the combat is more fun and action-oriented, the characters are more interesting and the story is clear and solid. I was happy to trot through the story because I wanted to see what happened next, and I didn’t feel at any point like I needed more side-quests or time to wander the map. But that is a matter of personal preference.

But Dragon Age II’s biggest point of improvement is the interaction with the NPCs. This was true of Mass Effect 2 as well. Obviously, as a liberal leftist person, the idea of choice in sexual orientation lets me give the game a satisfied nod. On the other hand, it’s an easy thing to screw up. Dragon Age: Origins had a very clumsy romance system. Now, romance systems shouldn’t necessarily be the flagship mechanic of a game, but it might as well be good.

Abstractly, I like the route Dragon Age II chose. Some characters are romance characters. Some are not. The romance NPCs all think your character is hot shit. They don’t care what gender you’re playing, you are one sexy devil. While hilarious, this isn’t as clumsy as previous ways of handling this, where you have to play the dating game, walking a thin line for the whole game to make the NPC fall for your character. In Dragon Age II, the NPCs are falling over each other to get to you. Comical, but I like it.

The NPCs themselves are better characters with much better voice direction than in Dragon Age: Origins, in which it sounded like no one knew what accent the voice talent were trying to fake. Dragon Age II’s voice acting sounds more natural, with a nice variety of accents and affectations, but without any stiffness or poor emphasis. The character’s motivations are clearer, their secrets are more interesting and their fighting styles are easier to coordinate.

If you do play Dragon Age II, take my advice. Always bring Varric along, and always let him do the talking. Trust me.

I am extremely excited right now because I am a huge Grey Knights fan (and have been since I was introduced to 40k). Today, Games Workshop announced the new Grey Knights, including the Grey Knight Nemesis Dreadknight. It looks goofy at first glance, but I think it’ll be very cool on the table. Even though I’m positive on the Dreadknight, I couldn’t resist…

(Most of the credit for this joke goes to my good friend John.)