Another progress report on the Defiler! Here’re some detail shots. You can see the skulls I arrayed on the tail. I put the skulls there to cover up where the wires terminate a bit. Next is a detail shot of the box at the base of the tail. My Green Stuff sculpting hopefully looks fleshy. I ran the wires from the front into the box as well. 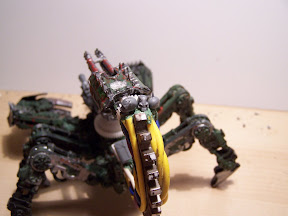 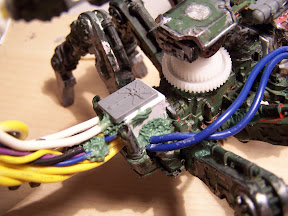 And below is a closeup of some work on the leg joints. Green Stuff helps holds the whole thing together and it gives the look of daemonflesh growing on the Defiler… hopefully. The second picture is a shot of the front claws. This is a fun picture because the blades on the back of the claws are very thin, but they were still pinnable. A little bit of glue would probably not hold those on for long, but a pin will hold them on for a very long time. 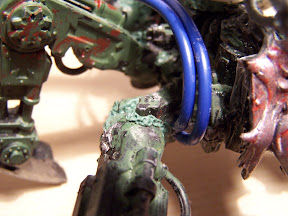 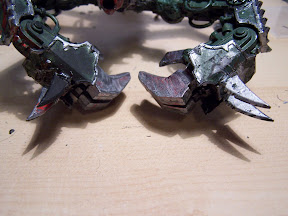 The box ended up looking odd to me. Its square-ness didn’t seem to blend with the shape of the model, so I decided to give it detail that would blend its shape into the main chassis. In the shot below, you can see I added some pipes to the box. Later, Green Stuff would complete the “blending” of the box into the chassis. Next is another shot of the tail with skulls, this time with a blade! The blade was broken off the leg, and it was the only leg-blade left, so I saw no purpose in putting it back on a leg. Also, two of the armor plates that go on the leg are missing, so I gave up on those, too. So, I pinned a blade onto the gun mount and it looks pretty cool. 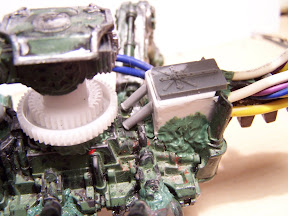 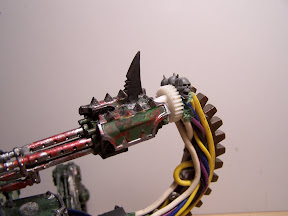 And below, finally, are two shots of the finished Defiler. Of course, I have to file off some seams and make sure holes are covered, and after the first coat of primer, I am probably going to have to go back and clean up some more (especially where there’s detail lost in the piles of paint and primer), but it is (basically) the final construction. 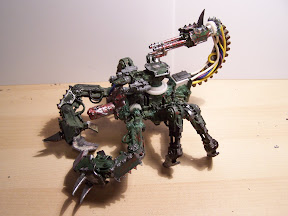 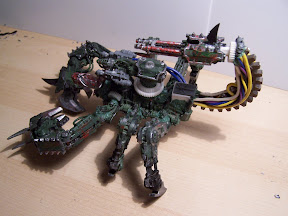 2 thoughts on “Defile the Defiler, Part 4”